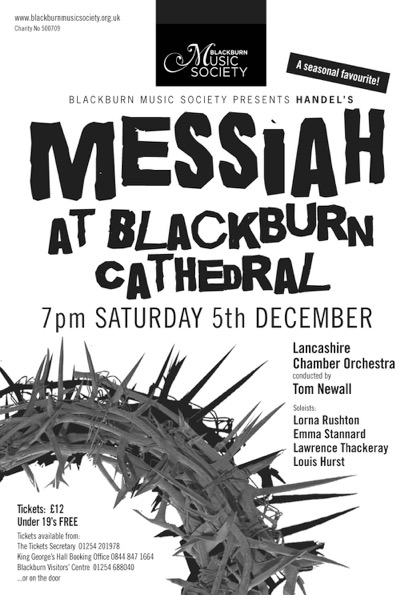 TO FIND CATHEDRAL, SEE MAP BELOW OR THIS ONE.

MORE PARKING INFORMATION CAN BE FOUND HERE. FEILDEN STREET CAR PARK IS CONVENIENT FOR THE CATHEDRAL AND FREE ON SATURDAYS.

with The Lancashire Chamber Orchestra

Soprano Lorna Rushton is from Bolton. She studied at the RNCM where she sang lead roles in many of the college operas including: Titania (Midsummer Night’s Dream), Susanna (The Marriage of Figaro) and Carolina (Il Matrimonio Segreto). After graduating, she continued her studies at the National Opera Studio. She has performed many leading roles including Madama Butterfly, Violetta (La Traviata), Rosalinda (Die Fledermaus), Hanna Glawari (The Merry Widow), Antonia (Tales of Hoffmann) and Donna Anna (Don Giovanni). In November 2013, she sang the role of Lady Macbeth in Verdi’s opera for City of Manchester Opera (COMO), which earned her a NODA award nomination. She is currently co-directing Die Fledermaus for Opera 74, as well as performing Rosalinda.

Mezzo-soprano, Emma Stannard trained at the RNCM gaining a first class BMus (Hons) and a MMus with Distiction under the tutelage of Peter Alexander Wilson. Whilst at the RNCM, Emma won many prizes and awards. She is now training on the Royal Academy of Music’s Opera Course, studying with Catherine Wyn-Rogers.

Emma has appeared with the Glyndebourne Festival Opera Chorus in performances of Bizet’s Carmen and Eugene Onegin (Tchaikovsky) among others. For Leeds based company ‘Young Opera Venture,’ Emma has performed the title role in scenes from Carmen as well as excerpts from The Magic Flute, The Merry Wives of Windsor and Così fan tutte. She will take the roles of Hanna, May Night (Rimsky Korsakov) and Poppea, L’incoronazione di Poppea (Monteverdi) in 2016.

On the concert platform, Emma has performed works including ‘Belle Nuit’ from Les contes d’Hoffmann (Offenbach) and Pierrot Lunaire, as well as appearing regularly on the oratorio platform (recently performing Mozart’s Requiem at the Cadogan Hall, London). In September she appeared as the alto soloist for televised performances of Beethoven’s 9th Symphony with the Kinshasa Symphony Orchestra.

Mancunian tenor Lawrence Thackeray recently graduated from the Opera Course at The Guildhall School of Music & Drama and is still based at the college where he is studying with Robert Dean on the Artist Diploma Program. He had previously trained in Ireland, studying at D.I.T Conservatory of Music & Drama in Dublin with Robert Alderson.
Lawrence’s fledgling Operatic career has so far seen him perform the roles of Alfredo (La Traviata), Tamino (The Magic Flute), Peter Quint (The Turn of the Screw) and Don Basillio (Le Nozze di Figaro) amongst others. Companies worked for include Glyndebourne Festival Opera, Opera Ireland and Kennet Opera.
Soloist performances on the Oratorio stage have included Britten’s Saint Nicholas, Verdi’s Messa da Requiem, Rossini’s Petite Messe Solennelle,  Orff’s Carmina Burana, Gounod’s St. Cecilia Masse, Handel’s Dixit Dominus, Haydn’s Stabat Mater and Haydn’s Theresienmesse.
Future engagements include Rodolfo in Merry Opera’s tour of La Boheme and recitals in Southwark Cathedral, The Barbican Hall and LSO St. Luke’s.
Lawrence is delighted to be back up north and with the Blackburn Choral Society for the second time.
www.lawrencethackeray.com

Louis Hurst is a young bass baritone studying with Stuart MacIntyre and has been selected to participate in the 2015/2016 ENO Opera Works Programme. He studied at RNCM which was made possible by the generous support of Michael Oglesby, the Drapers Guild and the Musician’s Benevolent Fund. His love of music developed during his time at Manchester Grammar School where he sang as a treble chorister. Louis has had the privilege to work with such renowned conductors as Mark Elder, Richard Hickox, Martyn Brabbins, Stephen Wilkinson and Nicholas Kraemer, amongst others. His opera roles have been eclectic and unusual, from a Lion to a Greek King and even God.