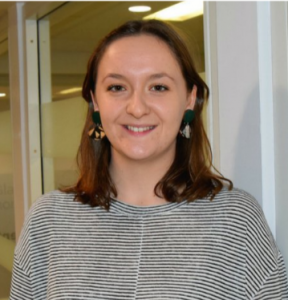 Abi Kitching, a Manchester-based conductor and music facilitator, joined BMS as Musical Director in September 2018.  She graduated with a first class honours music degree from the University of Manchester in 2017. During her time at university, she was Musical Director of chamber choir Ad Solem and a student conductor of the Manchester Chorus and The Cosmo Singers.

Alongside her role as Musical Director of Blackburn Music Society, she is the Assistant Musical Director of the Royal Scottish National Orchestra Chorus having been awarded the Alexander Gibson Memorial Fellowship. In this post she has worked closely with the chorus on repertoire including Brahms’ A German Requiem and Bernstein’s Chichester Psalms and Mass.  She is also Musical Director of Preston Orpheus Society and The Opera Shack, as well as being a conductor for the Hallé corporate choir scheme.

Abi is passionate about increasing accessibility to the arts, reflected in her work as a workshop leader for Streetwise Opera, The Irene Taylor Trust (Making Tracks and Music in Prisons), Olympias Music Foundation (Women’s Voices), Contact Theatre, The Academy Singers (Piccadilly Symphony Orchestra), Child’s Play India Foundation and her position as Artist in Residency at Risley Prison.  She is co-founder of Musica Festival (Manchester University) which celebrates female music making.

Abi is an active soprano with extensive choral experience and regularly performs, broadcasts and records with choirs such as Kantos Chamber Choir and Manchester Chamber Choir.  She also won the recital category in the prestigious David Clover Festival of Singing in 2017.